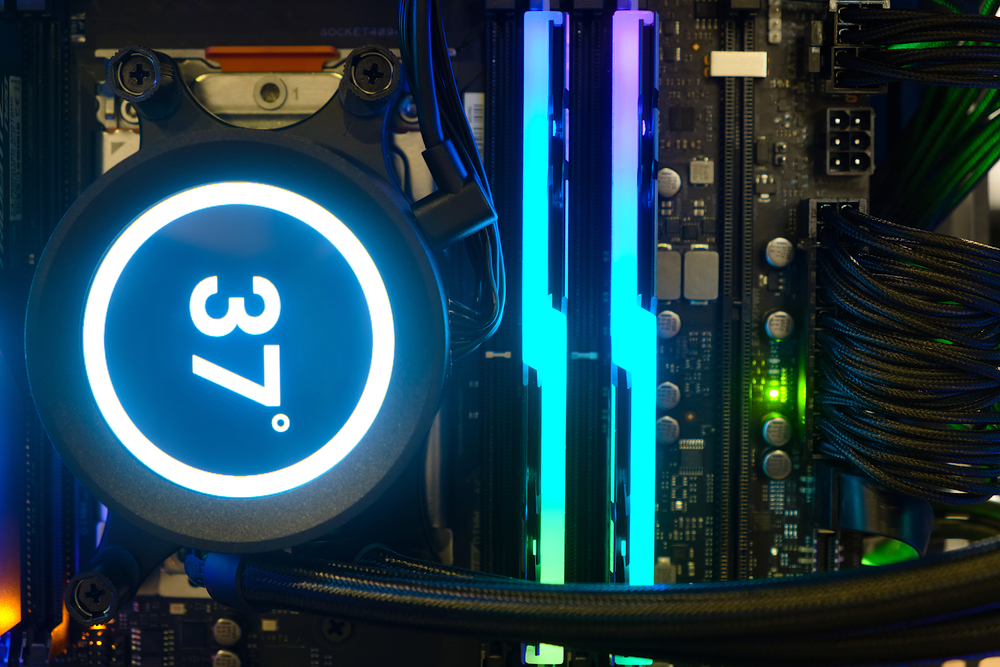 Your CPU is the main processing unit that provides instructions and data for the rest of your system. As such, it bears the brunt of the changing demands of the application you’re running at a given moment. As the application requires more power, the CPU has to match that, which increases the temperature depending on the increase in workload.

Some applications, like gaming and editing software or servers, fluctuate in workload from second to second. For instance, your game will usually require more of your CPU when it’s loading a map than when you’re playing on that map. This concept applies to other applications as well to varying degrees.

There are other factors that affect how much the temperature fluctuates, like the cooling system you have and the health of your CPU. But how do they affect the fluctuation?

What Causes a CPU Temperature to Fluctuate?

Since your CPU temperature will change drastically as you switch from one task to another, it’s helpful to know what causes those fluctuations. By knowing the reasons behind it, you can monitor the temperature to see if or when your CPU is hotter than it should be.

However, running multiple demanding applications at once can have the same result as running an application that requires more power than your CPU can provide. If you’re running too many applications for the cores/threads your CPU has, it will overheat itself trying to match the demands of your system.

If your CPU temperature is fluctuating wildly while running an application that shouldn’t be placing so much stress on your CPU, it’s likely that one of the other factors in this section is to blame.

Another common cause of wild temperature fluctuations stems from the cooling system you have in place. This can apply to both your CPU fans and your case fans, but it mostly comes with an underperforming CPU fan.

If your CPU fan is underperforming, it could mean that your CPU is dying or that the fan is either malfunctioning or simply not powerful enough to keep the CPU at a safe temperature. This will cause your CPU temperature to get too hot when it shouldn’t.

For example, an underperforming CPU fan could cause your CPU to hit 80°C or higher when browsing or light gaming when it otherwise should be around 70°C and lower. Sometimes, your case fans are also to blame for this, as well as a lack of airflow around your case.

Your CPU will generally shut itself down if it overheats for too long, but it’s best to have a sufficient cooling setup in place to avoid that problem entirely. If you already have a great cooling system and your CPU temperature is still fluctuating and overheating, it could be one of the other causes on this list.

Thermal paste, or compound, is the thick substance you find between your CPU’s backside and your heatsink. Its purpose is to eliminate microscopic air bubbles to maximize the heat transfer between your CPU and heatsink so that the heatsink can dissipate all of it easily.

Over time, thermal paste dries up and requires reapplication. If your thermal paste is dried up, it won’t transfer heat as effectively as it should, resulting in the CPU retaining too much heat and overheating easily.

You’ll want to make sure that your thermal paste is still thick and not dried up to ensure maximum heat transfer. Otherwise, your CPU will overheat during the common bursts of processing power it goes through, which causes wild temperature fluctuations.

When your CPU nears the end of its lifespan, it stops giving proper instructions to some of your components. A common occurrence with dying CPUs is that they fail to direct the fans appropriately, resulting in a temperature spike.

There are ways to test your CPU’s life and functionality, as well as your motherboard’s, which causes similar issues. A dying CPU might also overwork itself and, despite your thermal paste and cooling system, get too hot faster than it can be cooled off.

How Can I Prevent Dangerous Temperature Fluctuation?

Now that you know what causes drastic temperature fluctuations in your CPU, you can start to address it. If your temperature is fluctuating to a dangerous temperature – pretty much anything over 80°C – you need to identify the cause of it and troubleshoot accordingly.

In this section, I’ve outlined some of the basics entailed in troubleshooting the common causes of dangerous temperature fluctuations. Once you’ve identified the cause, follow these directions to fix the problem.

If your system has a faulty or underperforming fan setup, the CPU won’t be getting the cooling it needs to avoid dangerous temperature fluctuations. The simple solution here is to either get new, more powerful fans, or to place your PC in a spot that gets better airflow.

As for the former solution, you’ll have to make sure that the replacement fans you get are compatible with your motherboard. For this, you’ll want to check your manufacturer’s site and verify the specifications are met. It may also help to test the fans to see if any in particular are having hardware issues, which you can do by either listening to the fans or using software like SpeedFan.

If your fans are functioning properly but you believe the issue to be airflow-related, the best thing you can do is put your case on top of a desk. When a case is tucked in a corner, on the ground, or otherwise removed from open air, it will collect dust more rapidly and have less space to push the dust out of.

See also  Is Liquid Cooling Worth It?

If you’ve followed these steps and your CPU temperature is still fluctuating dangerously, the problem likely lies elsewhere.

If your thermal paste is dried up, it won’t conduct heat well enough for your heatsink to dissipate. This problem has a simple solution as well, which is to reapply new thermal paste to the CPU.

You’ll want to be careful when removing the components around your CPU, but once you get it released, simply scrape off the old thermal paste and reapply the new paste according to the instructions provided with it.

This should help some, but it’s possible that the thermal paste wasn’t the only issue, so monitor the temperatures after reapplying and if it’s still fluctuating to dangerous temperatures, investigate further.

This may seem like an obvious solution, but it’s not very difficult to overlook your CPU’s capabilities when you want to run a specific application. If you notice your CPU temperature fluctuates much more with one application than others, check the recommended system requirements for the application.

It could be that your CPU simply isn’t powerful enough for the application, in which case you should stop using it. Overworking your CPU is a great way to make it die prematurely, so make sure the applications you’re running are within your CPU’s capabilities.

If none of the above solutions solve your problem, your CPU might be dying, in which case you’ll want a replacement. You should first check if your CPU is dead, and run tests on it to see if it’s failing to function in any way.

Replacing your CPU with a new one is costly, but the best way to maintain the integrity of your system. Using a dying CPU for too long can have negative impacts on your other components, so it’s best to remove the bad limb before the infection spreads.

At the end of the day, a CPU’s temperature is supposed to fluctuate as the intensity of its tasks varies from application to application. However, if your temperature is fluctuating to dangerous temperatures, you’ll want to identify what’s causing it and troubleshoot accordingly to prevent further damage.

When Should I Worry About My CPU Temperature?

When your CPU temperature exceeds 80°C, you’ll want to start monitoring it closely. If it exceeds 90°C, you’re in overheating territory and should ensure your system is capable of cooling it off to avoid that.

Is It Normal for a CPU Temperature to Fluctuate So Much?

It’s normal for a CPU temperature to go from 50°C to 80°C at a moment’s notice, but it should not readily exceed that temperature. If it fluctuates above 90°C frequently, your system is failing in some way or other that needs to be addressed.