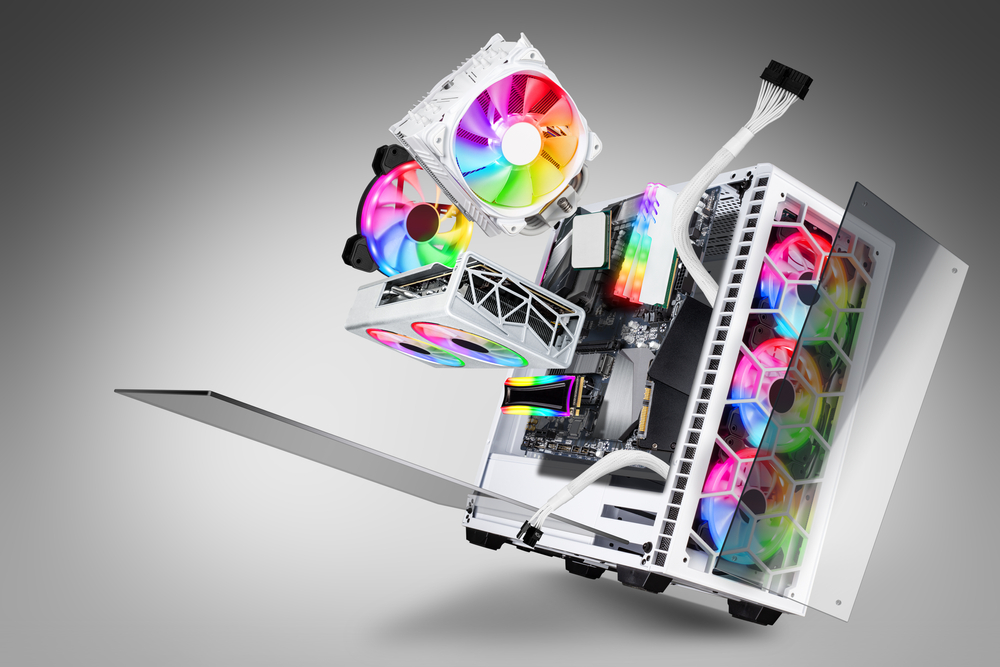 If you’re building a new computer, you may be overwhelmed by all the moving parts and components. From your PSU to your GPU, there are fans located all throughout your computer.

This in-depth guide will discuss what sys fans and CPU fans are and when you should consider upgrading them.

What is a Sys Fan?

A sys fan is also known as a system fan or case fan. Sys fans are used to move air throughout your computer case.

Additionally, certain standard-ATX tower cases have vents and fan sockets where fans can be installed to cool off the motherboard components and expansion cards directly.

You can also find a variety of case fans that come equipped with LEDs to boost the aesthetic of your computer.

In essence, sys fans provide your computer with the airflow needed to maintain safe temperatures.

Case fans come in a variety of different sizes:

120 mm-sized fans are the most commonly used and do a great job at cooling down standard PCs.

When Should I Upgrade My Sys Fans?

If your case fans are regularly maintained for dust, they can typically last a few years. However, I recommend replacing your case fans every 3 to 5 years.

However, you should consider replacing your sys fans earlier if you notice your computer overheating or loud noises emitted from your fans.

What is a CPU Fan?

The CPU is the brain of your computer and is the component that executes every task. For this reason, CPUs have dedicated CPU fans that prevent overheating.

Without CPU cooling, the CPU would overheat in a matter of seconds and cause your computer to break down.

The CPU fan works in harmony with the heat sink that’s attached to the CPU. The heat sink is a metallic component that sits directly on the processor. It functions to draw heat away from the chip into its aluminum, fin-like structure.

In addition, the CPU fan attaches directly to the heat sink and pulls the hot air out of the heat sink’s fins. As such, CPU fans play a significant role in cooling down your CPU.

CPU fans come in a variety of different sizes and include an aluminum and/or copper heat sink. The exact CPU fan specifications determine how wide it is and whether it uses ball bearings or not. CPU fans that use ball bearings are typically quieter than non-bearing fans.

The CPU fan and heat sink will also specify which CPUs it’s compatible with. So, it’s essential to know what CPU you have if you’re looking to purchase a new CPU fan.

It’s important to know that some CPUs come with cooling while others do not. In fact, Intel processors that are “unlocked” won’t come with any CPU cooling. Furthermore, higher-end Ryzen CPUs don’t come with CPU fans as well.

These are typically premium processors that require a high-quality aftermarket cooling solution to run efficiently. Furthermore, CPUs that don’t come with cooling are typically made to be overclocked, which requires more cooling as well.

When Should I Upgrade My CPU Fans?

CPU fans need to be upgraded if your CPU is overheating at unsafe temperatures. Usually, temperatures above 85 degrees Celsius are a concern no matter what you’re doing on your computer.

In fact, your CPU should never reach above 90 degrees Celsius under heavy load. If it does, you should try reducing the temperatures by cleaning out dust, inspecting the fans, managing the cables, or ultimately replacing the CPU fan.

Computer fans usually come in either 3-pin or 4-pin varieties. This indicates whether the wire that attaches the fan to your motherboard has either three prongs or four prongs at its connection point.

The connectors on 3-pin fans carry three signals: power, ground, and a speed sensor. These fans can only be slowed down or sped up by adjusting the DC current on the power pin.

This is hard to accomplish on many motherboards, so 3-pin fans usually run at constant full speed or only achieve lower speeds through undervolting. Undervolting causes the fans to be noisier and more vulnerable to wearing out.

The fourth pin seen on 4-pin connectors allows for PWM or pulse width modification. Pulse width modification adds another electronic signal that directly controls the fan’s speed. As such, PWM will enable you to set smooth, automated fan routines based on the temperatures inside your computer.

Furthermore, it’s essential to know that 3-pin fans will work in a 4-pin header and vice versa. However, you’ll lose the speed adjusting PWM features.

Other Types of Computer Fans

Although case fans and CPU fans are the most common fans seen in computers, there are a variety of other fans as well.

Let’s take a look at the other types of computer fans.

Your PSU or power supply unit is responsible for delivering power to every component of your computer. For this reason, they can overheat if under significant load. Most PSUs come equipped with a stock fan that’s adequate for its cooling purposes. Furthermore, PSU fans are usually hard to replace since PSUs are more complex to open up and work inside.

So, if your PSU faces overheating, I recommend saving up for an entirely new PSU instead of upgrading the fans.

Most modern graphics cards come equipped with their own dedicated fans that are responsible for preventing overheating. These fans are used to cool the heat sink or memory chip attached to the GPU. Certain high-end graphics cards produce more heat than CPUs, so it’s crucial they have an effective cooling solution. As of 2010, GPUs have come with either axial fans or a centrifugal fan.

A chipset fan is used to cool the chipsets on a computer’s motherboard. These fans are needed when the system bus is overclocked and dissipates more power than usual. However, chipset fans are usually not required for standard PC usage.

With the innovation of today’s modern technology, there are even hard drives that require dedicated cooling as well. As such, high-performance computers may need a devoted cooling fan.

CPU fans are solely used to cool off your computer’s CPU and prevent overheating.

Furthermore, CPU fans and sys fans can be used interchangeably if they are placed in the correct fan header. You may need to adjust the fan speed settings as well, depending on if the fan uses a 3-pin or 4-pin connection.

All in all, computer fans are extremely important for the overall performance of your computer and keep your components safe. An overheated computer can lead to significantly reduced performance or complete shutdown.

For this reason, it’s important to regularly clean your computer for dust and ensure each fan is working correctly.

Can I Plug a System Fan Into a CPU Fan Slot?

Yes, you can safely connect case fans to CPU fan headers. Generally speaking, you can use any fan on any fan connector without any issues. However, you’ll need to adjust the fan curves in your BIOS menu so that the right curve matches the right fan.

How Many Case or System Fans Do I Need?

I recommend attaching at least two system fans to your computer’s case. One fan should be used for air intake, and the other should be used for air exhaust. The first two fans you install in your system provide enormous thermal gains. There are only incremental gains for each additional fan you install. If you choose to use three fans, use the additional fan as an intake fan.

Do I Need Both Sys Fans and CPU Fans?

CPU fans and case fans are necessary for every computer build. Your CPU will instantly overheat without them and cause a temporary malfunction or permanent failure. Although sys fans aren’t technically required if you have sufficient cooling through CPU fans, it’s recommended to use them. Any CPU cooler needs a source of fresh air to function properly, so you should have at least one intake fan and one exhaust fan.