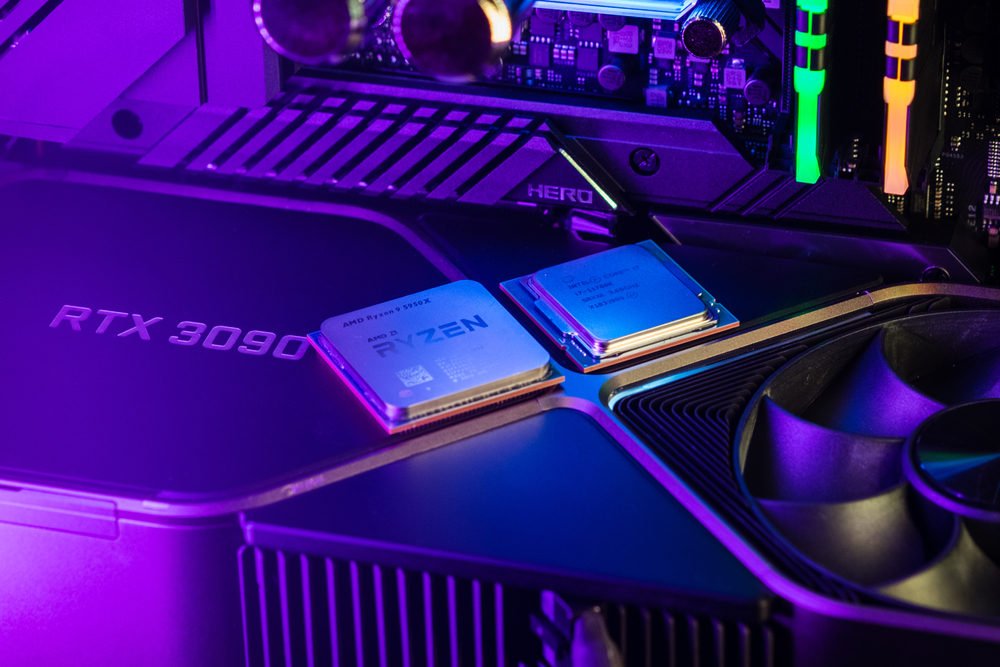 If you’re a gamer looking to upgrade your build, you may be wondering if you should invest your money in a new CPU or GPU.

For gaming, your GPU is more important since it’s the primary driver for most games. Your graphics card is what actually renders the images and animations you see in video games. However, you’ll need an accompanying CPU that doesn’t bottleneck the performance of your GPU. As long as your CPU is sufficient, GPUs are far more essential in gaming.

As with everything in life, there needs to be a balance within your computer build. Using a 7-year-old processor with a brand new GPU is inefficient and won’t allow you to get the most out of your GPU.

On the other hand, using a brand new CPU with an outdated GPU presents a low-quality gaming experience with reduced visual output.

For this reason, I recommend allocating around two-thirds of your budget to the GPU and the other third to the CPU.

However, I’ll discuss specific roles your GPU and CPU play in gaming and everything else you need to know in this in-depth guide.

What is the CPU?

CPU stands for central processing unit and functions as the brain of your computer. It receives instructions from the operating system and handles getting data to and from the memory, keyboard, network, hard drive, mouse, and video card.

The CPU is in charge of executing a diverse set of instructions through the fetch-code-execute cycle to manage every component of your computer and run computer programs.

In essence, CPUs handle all the computations that drive every single action in your computer system. They are good at performing a lot of tasks quickly. Modern-day PCs are very general-purpose machines, so CPUs need to be able to handle lots of random and diverse instructions efficiently.

Within every CPU, there are:

Each of these components works together in unison to create an environment where high-speed task parallelism occurs.

For this reason, CPUs allow your computer to run multiple programs, display your desktop, connect to the internet, and much more, all at the same time.

How Does CPU Affect Gaming?

Modern games have an extremely large number of variables that CPUs need to keep track of.

These include player inputs, player collision, calculating damage dealt, running AI scripts for NPCs, and submitting work for the GPU to perform.

In essence, the CPU has to manage the presence and interactions of thousands of different factors simultaneously.

More environmentally intensive games such as Skyrim or Witcher 3 require a higher-end CPU to run optimally. These are large sandbox-type games where the world is endless, and the computer constantly loads different segments of the map as you move around.

In games such as these, more CPU cores allow you to receive a better framerate.

However, FPS games such as Valorant or Battlefield require a less intensive CPU since the map is only loaded one time before the game even begins.

What is the GPU?

The GPU stands for graphical processing unit and is also known as a graphics card or video card.

Although they are incredibly similar to CPUs, GPUs specialize in rendering images, video, and animations. GPUs utilize thousands of simple processors that are excellent at the particular type of mathematics used to generate images on your screen.

GPUs perform millions of calculations at the same time in parallel. Because of this, GPUs are focused more on raw throughput.

Furthermore, GPU architecture usually features many identical compute units that deal with solving the similar mathematical functions that display images on your screen.

How Does GPU Affect Gaming?

GPUs are in charge of putting all the visual elements such as environments, characters, lighting, shadows, and so forth on your screen.

So, a better GPU gives you higher FPS and allows you to use higher in-game graphic settings.

In addition, GPUs are equipped with VRAM, also known as video RAM. This built-in memory is used to store image data for your computer to display. It functions to ensure smooth execution of graphics display without needing to access your computer’s dedicated RAM.

The latest AAA game titles like GTA 5, Red Dead Redemption 2, and Cyberpunk 2077 all require an intensive GPU to render the graphics correctly.

These games have extremely demanding graphics and require a powerful GPU to render polygons, map textures, and so forth.

If you don’t have a sufficient GPU while playing these games, your FPS will be drastically impacted to the point where the game is unplayable.

However, you’ll need to pair the GPU with an adequate CPU to avoid bottlenecks.

GPU vs CPU For Gaming

When the question is CPU or GPU more important for gaming arises, the GPU is slightly more important, but you’ll need a combination of both and a balanced system.

You should avoid using an extremely powerful GPU with an old and inefficient CPU. If you do combine these components, you’ll inevitably be faced with CPU bottlenecks. CPU bottlenecks happen because your computer will only be as fast as the slowest part in your PC.

So, a low-quality CPU may reduce the ability of your GPU to perform at its full potential.

The best way to decide if you should upgrade your CPU or GPU is to understand the performance requirements for the specific games you play.

If you’re considering upgrading your GPU, here are a few crucial details to understand.

Although most GPUs meet the minimum requirements for 1080p gaming, you’ll need a higher-end graphics card for 1440p and 4K resolutions.

If you still game on a 60hz monitor, I highly recommend upgrading to a 144hz monitor. The visual performance and detail are exponentially enhanced when you upgrade. However, 144hz monitors require more powerful GPUs.

I recommend getting a GPU that has at least 4 GB of memory for gaming at 1080p resolutions. However, 4K resolution gamers should get a GPU that offers at least 8 GB memory.

GPUs come in all sorts of shapes and sizes, so you’ll need to ensure the graphics card you’re interested in purchasing fits inside your case.

All in all, a computer’s GPU is more important for gaming in comparison to the CPU. GPUs are dedicated components that focus on rendering the visual elements on your screen. For this reason, the quality of your GPU plays a significant role in determining how smooth your game will run.

However, you shouldn’t ignore your CPU either. The GPU and CPU work together to perform all the functions required in gaming. A low-quality CPU can hinder your GPUs ability to perform at its full potential.

Lastly, the exact weight of importance of each device depends on which game you’re playing. Some games require a more intensive CPU, while other games need a high-quality GPU for smooth output. So, it’s essential to find the recommendations of the CPU and GPU required for your specific game.

When Should I Upgrade My GPU for Gaming?

If your GPU constantly reaches 100% utilization while gaming, it’s a tell-tale sign you need to upgrade your GPU. Furthermore, if your game is stuttering with high FPS, even at minimum in-game graphic settings, I recommend upgrading your GPU. In addition, if you have a powerful CPU and a weak GPU, it will cause a bottleneck, and you’ll need to upgrade your GPU to make the most out of your processor.

When Should I Upgrade My CPU for Gaming?

You should upgrade your CPU if there is bottlenecking and your CPU cannot provide the support needed for your GPU to run at its full potential. Furthermore, you may want to consider upgrading your CPU if it is outdated and only has two cores. Most modern games require four cores in order to run the game properly without any freezing.

Will My CPU Affect FPS?

Although your GPU has the highest impact on your in-game FPS, the CPU also plays a role in determining how many frames you get. However, the direct correlation of your CPU and FPS depends on what type of game you’re playing. MMORPGs with massive worlds require higher-performing CPUs to gain higher FPS.