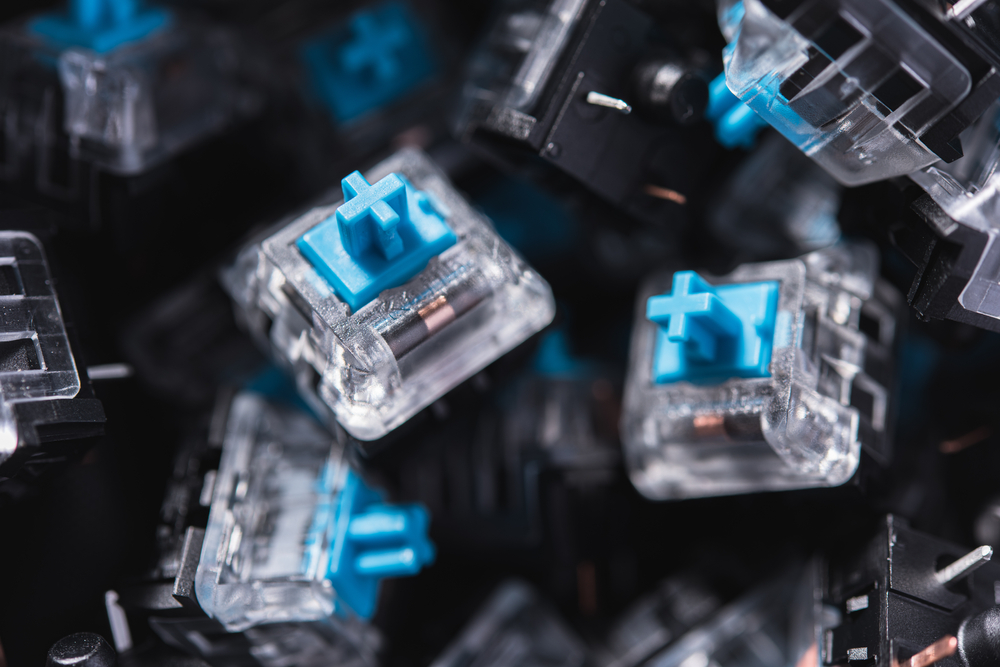 Finding a worthwhile gaming keyboard for your preferences can be tricky, particularly as the market grows more and more saturated. You first have to decide between mechanical or mecha-membrane keyboards, then decide which switch suits your tastes best.

However, some gamers aren’t even aware of the difference between mechanical keyboard switches. They may know that the two most popular are blue and red switches, but the nuances and differences between the two evade them. The purpose of this article is to simplify matters to help you make a decision.

Blue switches are bad for gaming. They generate a lot of noise, and the tactile bump they are known for makes button-mashing feel muddy and causes a decrease in performance. They also have a much worse actuation than linear switches, whereas a red switch has better actuation and generates far less noise. If you want the best performance, go red.

Not all gamers use their keyboards explicitly for gaming, though, so it’s helpful to know the differences between blue and red switches to avoid buying a keyboard that won’t satisfy you.

The Difference Between Blue Switches and Red Switches

There are two big differences between blue and red switches, and these two differences make blue switches worse for gaming. Knowing the difference will prevent you from purchasing the wrong keyboard for your purposes.

It’s important to note that while red switches are categorically better than blue switches for gaming, there are better linear switches than red. Also, some people don’t play reactionary games and thus don’t require the actuation that linear switches provide.

Clicky switches have a tactile bump that you can feel and hear when you press on them, hence the name. When you press down on a key, you can hear a loud click and feel the button go over that bump. This is feedback from the switch letting you know that the keystroke has been registered, but it causes problems when gaming.

Linear switches, the most popular of which are red switches, require far less pressure to register a keystroke than clicky switches. This results in a quieter actuation and is much more sensitive to keystrokes, which increases your gaming accuracy.

However, typing with red switches can take some getting used to, since most people learn to type on blue switch keyboards. But the lighter actuation of the red switch can be extremely handy once you get used to it, as you can reduce the time between your keystrokes.

It’s important to note that blue switches can still be used for games that are primarily mouse-based, like Call of Duty, since the gameplay is centered more around how fast you can shoot rather than how nuanced your movements are.

Why Blue Switches are Bad for Gaming

Knowing the differences between blue and red switches is a great place to start, but I want to drive home the point that blue switches are bad for gaming. There are a few different reasons for this, which I’ll discuss in further detail in this section.

The most noticeable reason for blue switches being bad for gaming is the noise they produce. Clicky switches rely on a tactile bump to register keystrokes, and that bump makes a loud clicking noise every time you press down on a key.

It doesn’t sound like a huge problem on its own, especially if the clicky sounds scratch your brain in just the right spot. However, consider how hard it will be to hear your teammates over the sounds of your keyboard, or for them to hear you with all that background noise coming to their side.

Also, the noise can be distracting when you use your keyboard for regular typing purposes. The sounds are loud, and it’s easy to get distracted by the sound of your own typing. Red switches, or linear switches in general, are far quieter and eliminate this problem.

15g sounds like a small difference, but it’s noticeable when you’re button mashing or trying to nuance your movements in-game. Trying to press too many buttons in rapid succession on a blue switch keyboard can feel muddy at times and decreases your input speed.

On the other hand, linear switches are very sensitive to keystrokes, meaning button-mashing and nuances are easy to handle. The faster the actuation, the smoother your movements in-game and the better your performance.

Blue switches are alright for games that don’t require a ton of keyboard input, but when your success depends on your ability to move around and quickly input commands, a blue switch keyboard will make you fall short.

Since competitive gaming is a high-tier gaming class, reaction speed is everything. You need to be able to react quickly to changing environments and encounters, and a blue switch keyboard requires too much force and time to achieve that.

For instance, say you’re playing Fortnite, where you need to be building walls and pressing keys rapidly for most of the game. In high-stress encounters, a blue switch keyboard won’t respond quickly enough to your commands, which results in you having a major disadvantage.

Are Blue Switches Unusable for Gaming?

Blue switches, while not as proficient for gaming as linear switches, can still be used for gaming. You’ll have a harder time reacting quickly and fluidly changing your movement, but they ultimately are keyboard switches, and you only need a keyboard to move around.

Sometimes, blue switches are the only keyboard switch within the budget, so don’t let this article scare you off of them. Take note, however, that they won’t give you as solid of a performance boost as a linear switch would.

Blue switches are great for games that really only utilize WASD and QE keys, of which there are a variety. However, you’ll notice the performance issues pretty easily when you try to play a game like CS:GO or Battlegrounds with them.

It ultimately comes down to your preference, but linear switches are better for gaming. Get a blue switch keyboard if you need a keyboard for both gaming and work purposes equally. This will give you the best balance for the least money.

In the end, blue switches are categorically not good for gaming. They’re loud, slow, and inefficient, which makes competitive gaming impossible if you hope to compete with linear switches. However, whether or not you choose linear or clicky switches comes down to a matter of preference and what you need to use the keyboard for.

What Switch Color is Best for Gaming?

Red switches are the best all-around switches for gaming, but black switches have long been the high standard for gaming switches. They have an even lighter actuation and produce less sound, though you might have a hard time typing with them.

All blue switches are generally worse than linear switches for gaming, and that comes down to their actuation speed. Your finger needs to press the key fully down and release it for the keystroke to register, which makes nuanced movement and quick reactions difficult.

Are Blue Switches Good for Typing?

Blue switches are great for typing. They require more pressure to register the keystroke, which prevents accidentally double-clicking a key and having to backspace as a result. The clicking can be loud if you’re a fast typer, but hey, some people like that.