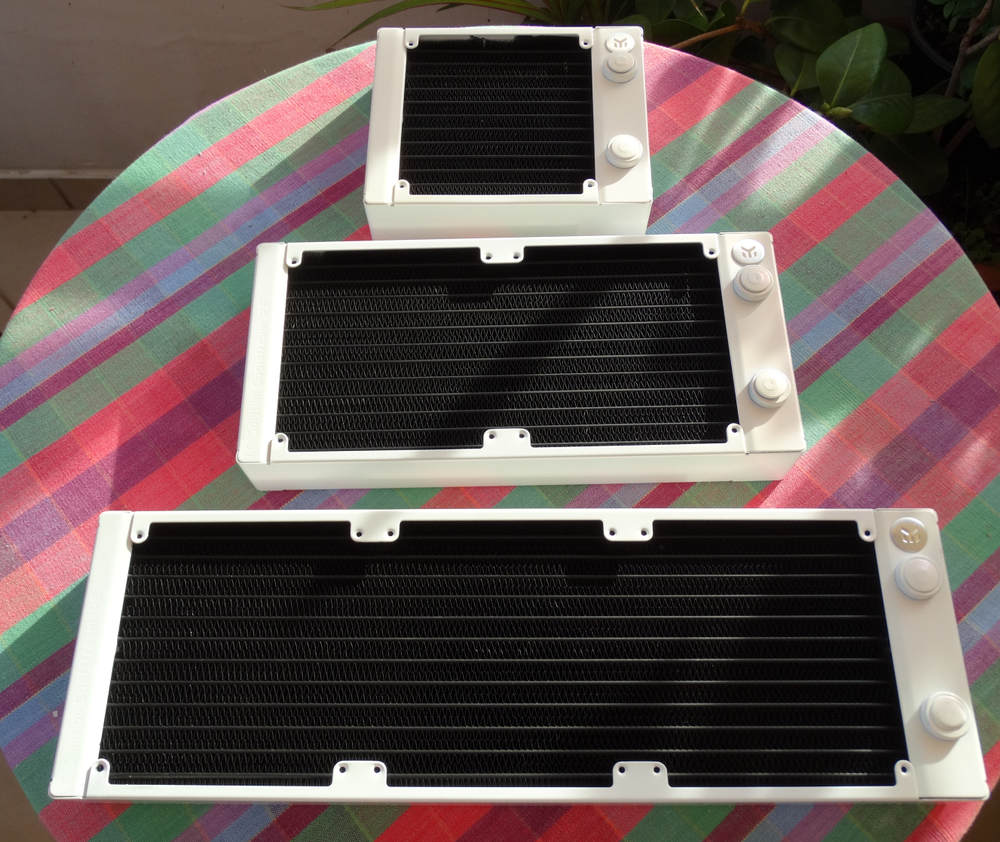 There are a ton of things worth considering when it comes to a PC gaming setup. PC gaming is superior to console gaming in a lot of ways, but perhaps the most important is that you can customize your setup to your specific ideals.

Part of building a great gaming setup is having the proper CPU coolant. There are a ton of different options out there – air and liquid being the chief types. For liquid radiators, there are 240mm and 280mm radiator options. The two perform at levels that are largely pretty similar, though the 280mm radiator has advantages over its 240mm counterpart. The 280mm radiator has larger fans, which means it is capable of cooling at around 2-4 degrees lower than a 240mm radiator. And despite its larger size, the 280mm is quieter than the 240mm option.

What is a Radiator/Liquid Cooler?

Air coolers are self-explanatory. They use air to keep the CPU cool during operation. A water- or liquid-based cooler, meanwhile, is what it sounds like. Water runs through the cooling system through a cooling block and over the CPU and/or the GPU.

The water goes through a radiator, which then releases the heat into the air and is blown out by the built-in fans. When using air cooling, a radiator isn’t required. That said, liquid cooling is thought to be more effective between the two.

What are the Pros of a Radiator?

For starters, radiators use lower RPMs, making them a much quieter option than air cooling units. This is due to the fact that the heat gets passed through a liquid which doesn’t ever leave the unit. Some of the air cooling units can get to be quite noisy, which can make for a distraction while gaming.

When it comes to the construction of CPU liquid coolers, they can be quite versatile in their design. When you look into some of the more complex setups out there, you will more likely than not find that they are liquid-based.

Finally, you can find all-in-one liquid CPU coolers in a number of different sizes. Given the possible size differences in custom setups, having access to a more versatile size range gives liquid radiators an advantage over air cooling units.

What are the Cons of a Radiator?

It kind of goes without saying but implementing liquid can lead to potential issues. Water and electricity do not play nice. Should a leak ever occur, it could lead to a potential short circuit, which could potentially ruin your system.

There are all-in-one cooling units that attempt to mitigate that issue, though. This works by minimizing the overall number of operating components while also keeping all of the internal processes at a centralized point.

What is the Difference between a 240mm and 280mm Radiator?

Generally speaking, if they are both in the same room, in the same case, with the same room temperatures, the 280mm will perform better. It should, on average, cool around 2-4 degrees lower than the 240mm counterpart.

Believe it or not, the 280mm radiator is also quieter despite being bigger. While the difference isn’t earth-shattering, for PC gamers it can be a noticeable difference. The main point going in favor of the 240mm radiator is that I can be substantially less costly while providing quite similar performance on the whole.

When a Radiator Won’t Be Necessary or a Good Fit

While it does perform superior cooling to air cooling units, a radiator is not necessarily needed depending on the setup. There are a couple of instances in which a radiator would be a bad idea or simply overkill.

If you don’t use your PC all that often, going with a stock or aftermarket air cooler should be more than fine. Likewise, if you have a CPU that isn’t prone to overheating, you should be fine with an air cooler option.

Liquid coolers are for high-performance CPUs that can really get hot quickly. Otherwise, implementing a liquid cooler is just overkill and you will end up wasting your money.

Which One Should You Choose?

Your gaming setup is your gaming setup. The beauty there is that, whatever specifications you want, you can implement. But everything comes at a cost and it must be compatible with the other components that you install.

But given the price differential, you won’t be missing much by opting for the cheaper 240mm option. You can put your money into other components like a superior graphics card, for instance, without missing much in the way of performance from your radiator.

There are two components to your CPU cooler system that are vital to its operation: the IHS and the TIM. The IHS is the integrated heat spreader. The IHS is the top silver cover space that you find on the CPU.

This elicits a heat transfer from the processer, which distributes the heat evenly to all the other areas of the CPU radiator. It can ether be soldered in place or fixed with an adhesive.

There is also the thermal interface material or TIM. This is the bridge between the CPU cooler heat base and the IHS. This component tends to be quite smooth as the overall smoothness can control the conductibility of the unit.

Other Considerations to Make Regarding Cooling

Having a proper CPU cooling unit is vital for the life of your CPU. But there are more than a few considerations to make when it comes to keeping your unit cool. Ensuring that your CPU is cool can improve performance and prevent the degradation of the various components inside of your machine.

There are a few other factors that you will want to keep in mind to ensure that your PC stays cool and performing optimally.

One of the quickest ways to an overheating PC is to have a messy setup. That starts with cable placement and management. Make sure that all of your cables are organized properly in order to prevent blockages.

Airflow is the name of the game when it comes to your PC. Any blockages, by cables or otherwise, are not only less-than-aesthetically pleasing, but can also prevent air from being able to get into the components of your PC.

Where space is at a premium, it is vital to keep your cables organized. You can even go with a modular power supply in order to reduce some of the clutter.

It isn’t necessarily just about what is going on outside of the PC cabinet. Consider what is happening inside, too. Think about where your hardware is installed on your PC’s motherboard as well.

If you have your SSD right under your GPU, for instance, that may not be ideal. This puts the storage device right in the path of hot air that gets pumped out of the GPU. That could degrade the drive over time, limiting its shelf life.

Depending on the size of the motherboard, you may be limited in your options. If you are building a PC from scratch, consider where certain pieces of hardware to go in order to maximize airflow and keep your system cool.

A cooling system is only going to do so much. If it has to battle other conditions that make the components of your PC hotter, then you will just wind up burning out your cooling system far quicker.

Room temperature is definitely one of those factors impacting PC temperature. While it might not be practical to keep an air conditioner running at all times, a warmer than average room can definitely contribute to overheating.

If you live in a climate that is hotter than normal, you should keep this in mind when it comes to your cooling solution.

Remember those blockages that we talked about with cable setups? Well, the same can happen if you keep a messy space around your PC setup. Buildups of dust and other blockages can keep fans from performing optimally.

Make sure that you open up your case and get in there with compressed air every couple of months. This will keep dust from building up on the various components, fan included. Make sure that you are taking note of how you take things apart so that they go back into their proper place.

Finally, if you are taking anything apart, be aware of any warranty restrictions. There is a chance that removing a component could violate the warranty and that is the last thing that you want to do.